Is Installing a Sun Tunnel Worth it? 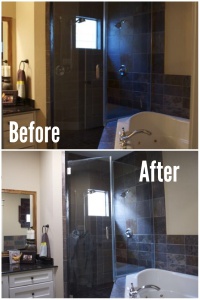 Natural light. It is a key factor in many people’s home purchase, but what do you do if a home you live in or might like to live in is too dark?

We ran into this issue at our new home in the Magnolia Grove – Rice Military area. The master bathroom has only one small window and is quite dark as you can see in the below pictures. 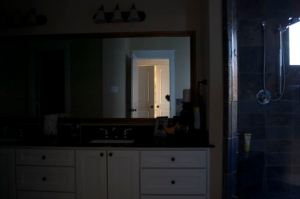 Excuse the camera peeking around the corner. I am not actually a professional photographer.

I reached out to a friend who used to be in the building industry and now sells Sun Tunnel skylights. He recommended we call his client, Innovative Skylights, to get more information.

Dan Marshall with Innovative Skylights came by to take a look and let us know our options for adding more light to our bathroom. There are many options to consider from rigid tubing, flexible tubing, 10″ or 14″ as well as the angle of the installation.

Dan was great to work with and recommended a 14″ with the rigid tubing for our application. He explained that this set up would give us the most light from the sun tunnel since the opening is wider and the rigid tubing reflects more of the natural light to the room. We decided that was the way to go for us and book an appointment for installation.

I told you the ladder was big!

On the day of installation the crew showed up with a HUGE ladder and all the supplies needed. 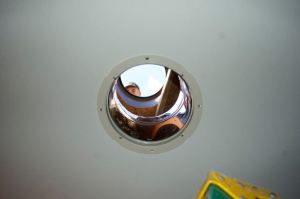 Being on the roof is why this was not a DIY project!

No artificial lights on at all in this photo.

It only took about 2.5 or 3 hours and then BAM! LIGHT!The Sun Tunnel really makes a (warning, cliche coming) night and day difference and we are very pleased with the light it brings in.

Now I want more of them. I should have asked about a bulk discount!

So if your home has some dark rooms call me and I can get you the information about our project.

As you can see I haven’t updated the blog in awhile. A busy summer got me derailed. If you miss these posts please let me know! mel (at) buildbuysellhouston (dot) com or leave a comment! Thanks for reading.

Need some peace and quiet? Come see this beautiful 2 story, 4 bedroom home on a quiet cul-de-sac. Gorgeous laminate flooring in the formal dining room and large family room provides a sophisticated feel and allow for easy entertaining. Enjoy your large yard and patio with beautiful oak trees and landscaping. Living in Lakes of Savannah allows you to walk to the elementary school, spend summers at the splash pad all while offering easy commutes with convenient access to Hwy 6, Hwy 288 and more. For details: www.har.com/75562784

This townhome is perfectly situated in the heart of Rice Military. An end unit, it is light filled with windows on three sides and open concept living. Substantial crown molding and a statement fireplace highlight the living space. The 3rd floor boasts a huge master and bathroom with great storage and a private balcony. The first floor would make a perfect guest suite or office with a small den leading to the yard. The AC has just been updated and there is fresh paint throughout!

Yesterday the Lakes on Eldridge HOA emailed out this picture:

With a note that this python got loose and would likely be seeking water. We should be careful with pets and kids. I mean wow. Seriously? My Facebook got lots of great comments. The consensus was no one could believe someone had time to take the photo but lost track of the gigantic snake? So last night Ryan and I had a little fun trying to track down the intruder.

Come see me today in this fantastic 5 bedroom home in Lakes on Eldridge. You don’t see many open houses in this gated community so don’t miss the chance to tour this home along with the lakes, walking trails, and more! There are only a few homes available and we don’t expect this one to last long. Stop by the guard gated entrance to get a map. I will be there 2-4. 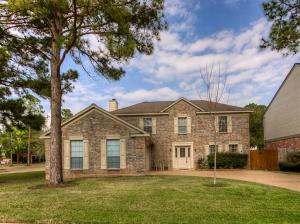 Here is a great chance to own a spacious home in Copperfield: 7518 Blue Bonnet Run Court, Houston, TX 77095.

4 bedrooms, 2.5 baths, 2 car garage on a great corner lot! Let me and the Build Buy Sell Houston Team know if you would like a sneak peek at this home!

Posted on March 21, 2013 by Melissa Hunzeker, Realtor
MLS Report for February 2013
NO SLOWDOWN IN SIGHT FOR THE HOUSTON HOUSING MARKET

HOUSTON — (March 19, 2013) — Home buyers kept Houston-area REALTORS® hopping in February, generating a 15.5 percent increase in sales compared to the same month last year, according to the latest monthly data compiled by the Houston Association of REALTORS® (HAR). The buying spree held local housing inventory to the same level as January — 3.6 months — which is the lowest supply of homes on the market since December 1999.

February marked the 21st consecutive month of increased home sales, with average and median prices reaching the highest levels for a February in Houston.

Contracts closed on 4,407 single-family homes during the month. All housing segments saw gains except for those priced below $80,000. That suggests the likelihood of an exhausted supply of available homes at that price point. Homes selling from $250,000 to $500,000 registered the greatest sales volume increase, accounting for the price appreciation.

“The recent flurry of home buying and reduced inventory may seem unusual, but is exactly what the Houston market experienced back in the late 1990s,” said HAR Chairman Danny Frank with Prudential Anderson Properties. “The difference is that now we are seeing multiple offers and bidding wars. We are still in a seller’s market, and I would advise anyone who is considering selling their home to consult a REALTOR® who can price it right and handle all the details and paperwork, including sorting through whatever offers may come in.”

The single-family home average price increased 9.6 percent year-over-year to $220,445, the highest level for a February in Houston. The median price—the figure at which half of the homes sold for more and half sold for less—rose 7.9 percent to $161,700, also a record high for a February.

Foreclosure property sales reported in the HAR Multiple Listing Service (MLS) declined 23.4 percent compared to February 2012. Foreclosures currently make up 15.8 percent of all property sales, down from 19.6 percent one month earlier. The median price of foreclosures climbed 7.7 percent to $85,000.

February sales of all property types in Houston totaled 5,324, a 17.2 percent increase over the same month last year. Total dollar volume for properties sold rocketed 26.5 percent to $1.1 billion versus $887 million a year earlier.

February delivered positive results to Houston’s overall real estate market when all sales categories are compared to February 2012. On a year-over-year basis, total property sales, total dollar volume and average and median pricing were all up.

Month-end pending sales for February totaled 3,877. That is up 12.7 percent from last year and signals the probability of yet further growth in property sales when the March figures are tallied. Active listings, or the number of available properties, at the end of February declined 20.9 percent from February 2012 to 33,361.

Housing inventory in Houston has now held at 3.6 months for two consecutive months. That is the lowest level since December 1999. Inventory first fell below a five-month supply in August 2012 and then tumbled below a four-month supply last December. The inventory of single-family homes across the United States stands at 4.2 months, according to the latest report from the National Association of REALTORS® (NAR).

* Months inventory estimates the number of months it will take to deplete current active inventory based on the prior 12 months sales activity. This figure is representative of the single-family homes market.
Single-Family Homes Update

February sales of single-family homes in Houston totaled 4,407, up 15.5 percent from February 2012. That marks the 21st straight monthly increase.

Broken out by housing segment, February sales performed as follows:

HAR also breaks out the sales performance of existing single-family homes throughout the Houston market. In February 2013, existing home sales totaled 3,769, a 22.4 percent increase from the same month last year. The average sales price rose 10.4 percent year-over-year to $205,305 while the median sales price shot up 13.6 percent to $150,000.

Houston’s lease property market experienced declines in February. Rentals of single-family homes fell 16.3 percent compared to February 2012 and year-over-year townhouse/condominium rentals were down by 4.5 percent. The average rent for single-family lease homes was $1,515 while it was $1,397 for townhouses/condominiums – representing increases of 6.6 percent and 10.9 percent respectively.

Houston Real Estate Milestones in February
The computerized Multiple Listing Service of the Houston Association of REALTORS® includes residential properties and new homes listed by REALTORS® throughout Harris, Fort Bend and Montgomery counties, as well as parts of Brazoria, Galveston, Waller and Wharton counties. Residential home sales statistics as well as listing information for more than 50,000 properties may be found on the Internet at http://www.har.com.

The MLS does not verify the information provided and disclaims any responsibility for its accuracy. All data is preliminary and subject to change. Monthly sales figures reported since November 1998 includes a statistical estimation to account for late entries. Twelve-month totals may vary from actual end-of-year figures. (Single-family detached homes were broken out separately in monthly figures beginning February 1988.) Founded in 1918, the Houston Association of REALTORS®

(HAR) is a member organization of real estate professionals engaged in every aspect of the industry, including residential and commercial sales and leasing, appraisal, property management and counseling. It is the largest individual dues-paying membership trade association in Houston as well as the second largest local association/board of REALTORS® in the United States. 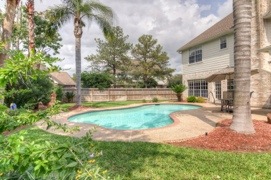 Since there are so few recent sales I combined the 3 neighborhoods this month.

Here is what happened in February:

The biggest change we have is to Days on Market. And once again in a sample size this small average isn’t really average. A couple of homes can rally skew these numbers.  If you asked me “How long will it take to sell my Lakes on Eldridge Home?” or my Twin Lakes or my Lakes on Eldridge North home, I would say a couple of days. Maybe less, as long as you were priced right. 4 of the 8 homes that sold recently sold in less than a week.

Spring is a time when lots of people start considering selling their home. Why not get a jump on the competition?  And hey, it may only take 2 days to get your home sold? You could done with inspections before spring break starts.

Twin Lakes, Lakes on Eldridge, and Lakes on Eldridge North are located in West Houston North of I10 along Eldridge. They are convenient to the Houston Energy Corridor, City Centre, Memorial City and more. 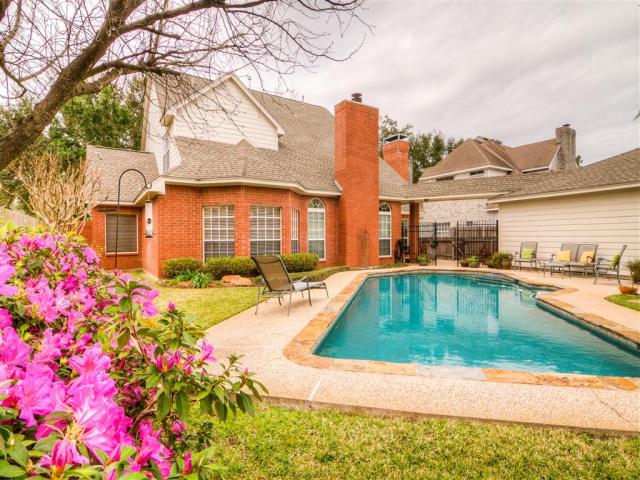 This Beautiful Pool in Deerfield Village is now available. 5022 Tarnbrook has 4 bedrooms, 3.5 baths and at $235,000 it won’t last long. The house is immaculate and ready to host your summer parties! Call me if you’d like to schedule a private showing.